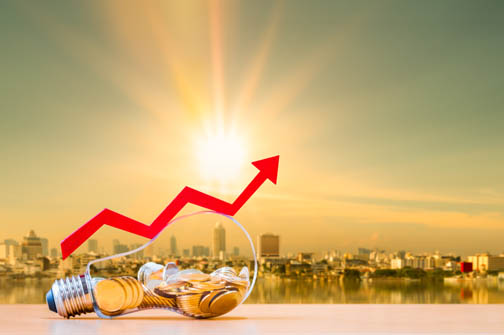 While oil stocks have taken a severe beating as a result of the one-two punch delivered by already falling oil prices and the coronavirus pandemic, this has led to renewable energy stocks growing in popularity among some investors. Even the least savvy investors know that oil prices (and therefore oil stocks) can’t stay down forever, however, speculating on how much and when oil stocks will eventually rebound remains a daring proposition.

As many are aware, underlying issues were surrounding the deep decline in oil prices, including major structural issues within the industry and the increasing affordability of renewable energy sources.

As a result of all this, investors and financial advisors are hard-pressed to determine (whether for themselves, clients or audiences) what a prudent energy investment portfolio should look like in the “New Normal.” Not surprisingly, some experts are now recommending that long-term investors would be well-served to consider renewable energy companies for investment instead of those focused solely on oil.

Renewable energy expert Travis Hoium has a mixed take on solar energy stocks and First Solar in particular. “The renewable energy industry is in a strange position today,” he says. “It’s experiencing immense short-term disruption while seeing its long-term opportunity grow. Right now, we’re seeing hundreds of thousands of job losses across renewable energy, and dozens of companies are likely to go bankrupt as construction on projects stops around the world.”

In the long term, however, he believes that oil and natural gas companies are in far worse financial positions and exposing their fundamental risk. “That could lead utilities and regulators to shift toward renewable energy even faster now,” Hoium says, “especially now that fossil fuels are the more expensive source of electricity. Wind and solar projects are already winning competitive bids against fossil fuel plants regularly.”

All of this adds up to the opportunity for renewable energy products and service providers, according to Hoium. “All they have to do is get through the current financial crisis. And the company built to survive almost anything is First Solar. It had a net cash balance of $1.8 billion at the end of 2019 and a bookings backlog of 12,400 megawatts as of February 20.”

Hoium believes that First Solar’s financial strength will allow it to not only survive this crisis but will give it the ability to thrive once it’s over.

John Bromels, an investment writer for the ‘Fool, sees Brookfield Renewable Partners as a solid prospect: “I’m so used to seeing oil and gas stocks with negative five-year returns that it’s refreshing to look at an energy company that’s notched a 45.5% return over the last five years, and is poised to continue that trend. Brookfield Renewable Partners, one of the families of master limited partnerships managed by the capable team at Brookfield Asset Management (NYSE: BAM), is just such a company.”

According to Bromels, Brookfield Renewable’s strategy is simple: “Invest in high-quality renewable energy assets, then sell the power they generate to utilities via stable, long-term contracts.” The vast majority of Brookfield’s revenue and cash flow comes from hydroelectric dams in North and South America, but the company is acquiring more and more wind and solar assets. Recently, it agreed to buy the 38% of wind and solar specialist TerraForm Power (NASDAQ: TERP) that it doesn’t already own.

Senior energy and materials specialist Matt DiLallo sees things a bit differently than some of his colleagues. “Instead of trying to figure out a way to profit from the short-term fluctuations in the oil market, I’m more focused on the long-term growth potential I see ahead for renewable energy,” he says. “One way I’m doing that is by building a basket of clean energy companies that I believe have a bright future. The most recent addition to that section of my portfolio was Clearway Energy.”

Two factors drove DiLallo’s decision to buy Clearway. “First, it pays an attractive dividend that currently yields around 4.3% after a recent 5% boost. And that payout only consumes about 50% of the company’s cash flow.”

The other aspect DiLallo finds appealing about Clearway is its growth profile. At present, Clearway expects to generate $310 million in cash available for dividends this year. That would be 20% higher than last year, powered by recent acquisitions and expansion projects. “Meanwhile, Clearway recently signed a needle-moving deal to invest $241 million across several wind projects,” DiLallo says. “These new additions should generate an estimated $23 million of annual cash flow.”