Take a second and think; how many of the things you use each day rely on electricity to operate?

Things like your cell phone, laptop, tablet, and headphones probably come to mind. But, what about the basics like refrigerating food, lights, and heat? Its true, many of us in the wealthier parts of the world take access to electricity for granted.

The good news is that the number of people that don’t have access to electricity is shrinking. In 2018, for the first time ever, that number shrank to below 1 billion people according to the International Energy Agency.

In 2017, there were 7.55 billion people alive, and 87% of them had access to electricity. The remaining 1 billion people without electricity access tend to live in the poorest countries on the planet. According to the International Energy Agency, some 600,000 of them live in sub-Saharan Africa: 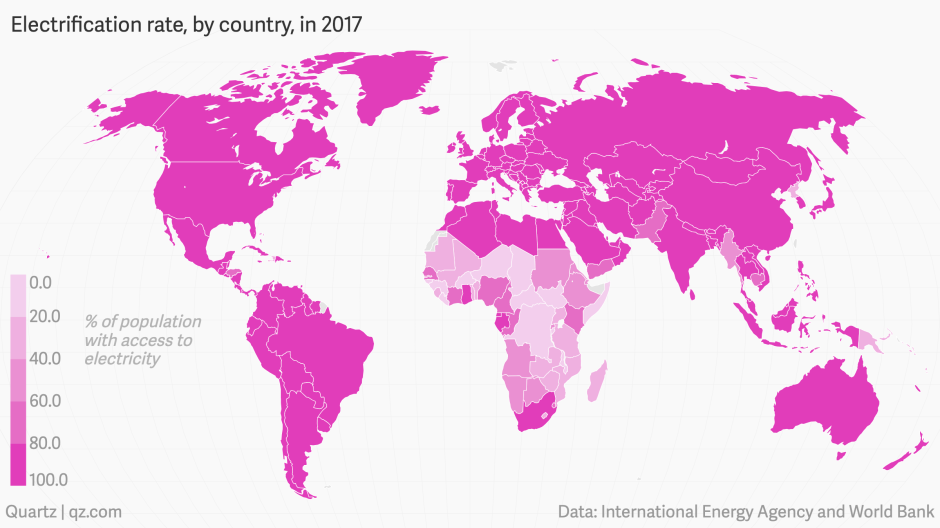 The World Health Organization has emphasized how critical access to electricity is to overall health. Without electricity, there this no way to refrigerate vaccines or operate essential healthcare equipment.

“Unreliable electricity access leads to vaccine spoilage, interruptions in the use of essential medical and diagnostic devices, and lack of even the most basic lighting and communications for maternal delivery and emergency procedures.”

The good news is that renewable energy costs are falling. This means that providing clean energy to remote places is now a viable option. Many countries have already started installing renewable energy for their citizens. Laos and Nepal, for example, went from having nearly no electricity in the year 2000 to both being over 90% electrified in 2017.