Renewable Energy Generation in the US Has Nearly Doubled Since 2008

Renewable generation provided a new record of 742 million MWh of electricity in 2018, nearly double that of 382 million MWh produced in 2008, according to a new report from the EIA. Also, renewable energy accounted for nearly 18% of all energy generation in the United States in 2018.

EIA says the growth in renewable technologies in the U.S., particularly in wind and solar, has been driven by federal and state policies and declining costs. Federal policies such as the American Reinvestment and Recovery Act of 2009, as well as the production tax credit and investment tax credit for wind and solar, have spurred project development, in addition to state-level policies, such as renewable portfolio standards, which require a certain share of electricity to come from renewable sources over time. 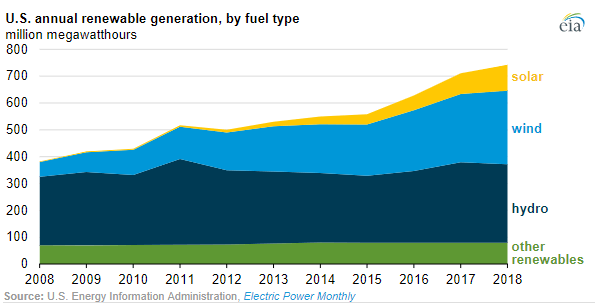 Further, as more wind and solar projects have come online, economies of scale have led to more efficient project development and financing mechanisms – which has led to continued cost declines, the agency explains.