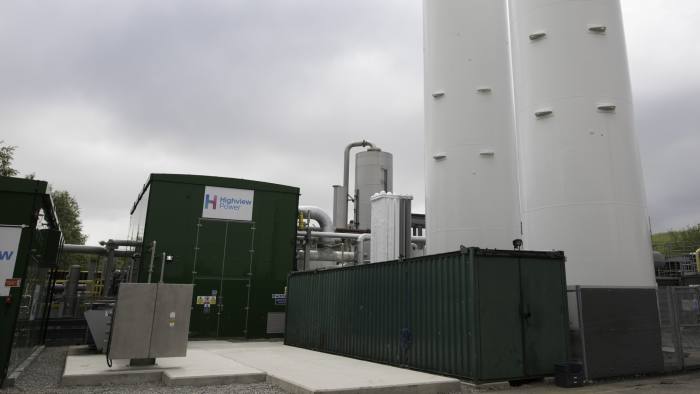 The UK is pioneering a new way to store power with the world’s first grid-scale liquid air energy storage plant.

The Pilsworth liquid air energy storage (LAES) plant, which is owned by Highview Power, opened on Tuesday in Bury and will act as a giant rechargeable battery, soaking up excess energy and releasing it when needed. This is particularly useful with the rapid growth in renewable energy, which accounted for 29 per cent of all electricity generated in the UK in 2017.

It generates excess power when the sun is shining and the wind is blowing but is not reliable at times of peak demand. Coal-fired power stations that typically handled peak electricity demand are being shut down and National Grid, which owns and operates the electricity transmission network, pays small gas and diesel generators to bridge the gap.

LAES is another, non-polluting option, according to Gareth Brett, chief executive of Highview Power, which developed the technology. “LAES is arguably the only viable, long-duration, locatable energy storage technology available,” he said. He added that the system, which was developed in conjunction with Birmingham university, has 33 patents and is cheaper than batteries at large scale.

It is also more durable: plants last for up to 40 years and can be installed anywhere. LAES works by cooling air to -196°C, transforming it into a liquid that is stored at low pressure in insulated tanks.

When power is needed the liquid air is pumped to high pressure and heated. The result is a high-pressure gas that is used to power a turbine and create electricity. The Pilsworth plant has a capacity of five megawatts and can store 15 megawatt hours (MWh) of electricity — enough to power about 5,000 average-sized homes for around three hours.

A commercial-scale plant would have a capacity of 50mw. Sean McLoughlin, a clean energy analyst at HSBC, said that liquid air energy storage was a more “complex” version of compressed air energy storage but had the advantage of being more space efficient. ​”Cryogenic cooling presents costs challenges and practical issues, which makes it in my view still an early-stage technology​,” he said.

The most common forms of energy storage today are lithium ion batteries and pumped hydro storage, but the growing importance of solving the energy storage challenge has led to increased investment in other technologies. Recommended Money Mentor Lindsay Cook Turn your solar panels into ready money The Highview system has already attracted interest from potential customers, including Enel, the Italian utility.

Gianluca Gigliuci, head of energy storage Innovation at Enel Green Power, said storage technologies were needed to “enable renewables to satisfy baseload”. “These storage systems need durability, long useful life, flexibility and reliability. Highview’s LAES is one of the more promising solutions we have seen.” Around 60 per cent of the global energy storage market comprises long-duration, grid- connected storage and LAES technology could meet almost half, according to Colin Roy, chairman of Highview power. “Worldwide there is a huge market [for LAES] worth $15bn a year,” he said.