With Tesla, Volt and Leaf already qualifying as household names, it’s clear that the market for electric vehicles has come into its own. While it probably made sports car aficionados squirm, the automaker Porsche recently received 30,000 down payments for their new electric car—and it isn’t even available yet.

During the fuel shortages and gas embargoes of the 1970s, fuel efficiency, consumption and availability were big hot-button items. Those who are old enough will remember not only the controversy, public concern and the frustration of waiting on gas lines, but that the entire automobile industry changed.

Fuel efficiency was the order of the day for auto manufacturers. Those Japanese car companies younger folks know well today had their boom in the ’70s and ’80s primarily because they got a leg up on Detroit’s “Big Three” automakers (GM, Ford, and Chrysler), who were simply slower at getting on the fuel efficiency bandwagon.

Those who do remember those bygone days may also recall that mopeds enjoyed a healthy resurgence during that time. Slightly more expensive than a bicycle, many were essentially bicycles with a 50cc engine added on, and in most communities in the U.S., they didn’t even have to be licensed. Mopeds became wildly popular for a time, not only among young, upwardly-mobile professional commuters but with teens who couldn’t yet afford a car.

These days, although engineering has managed to squeeze out far more MPGs from a gallon of gas than anyone ever dreamed of in the ’70s, fuel efficiency and pollution are still a concern. The latter, of course, is a major issue due to global concerns over climate change.

Prior to the recent resurgence in the economy, many began to look for more fuel-efficient modes of transportation than the big SUVs and large sedans we’d gotten used to driving again, thanks to the aforementioned engineering of motor vehicles and increasing popularity of alternative fuels (i.e., ethanol and natural gas).

This time around, the scaling-down wasn’t all about fuel efficiency however, even though this is an issue for the climate-conscious. Even people for whom fuel expenditures weren’t a major concern began to consider the questionable wisdom of driving that SUV to the supermarket to fetch a single item, or even for their daily commute if they happened to be fortunate enough to work close to home. More and more people who could do so began to bike to work for reasons of health, finances and the environment. Civil engineers began to cater to this trend, incorporating foot and bike paths into their planning.

The Return of the Scooter

A few years back, we began to see something some of us hadn’t seen in decades: Gasoline-powered scooters; “motor scooters” as they were known in the ’50s and ’60s. Made by the Italian manufacturer Piaggio, these waned in popularity in the 1960s as more people opted for large sedans and motorcycles.

Along with several other manufacturers, several years ago Vespa began selling scooters again—at least, a lot more than they were selling. Scooter manufacturers even began to offer a wider selection of two-wheeled machines, some of which boasted articulating front forks and engines large enough to keep up on many highways.

Familiar, but it’s Not Your Granny’s Vespa

Given the increasing demand for smaller vehicles that were easier on the environment, it was only a matter of time—and very little time, as it turned out—that Vespa and other manufacturers began to swap out those little gas engines in favor of electric models. Some of these offer removable batteries that can be charged either on the scooter or in one’s home or office.  This holiday season, Vespa even has a model that can be purchased at big box stores for less than $150 US. 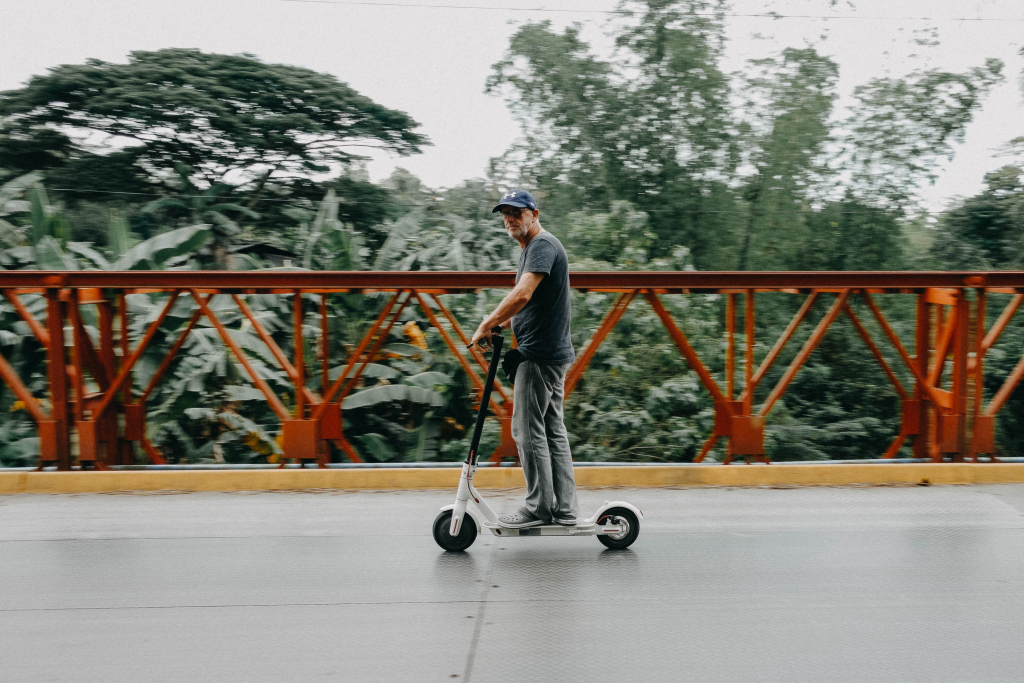 But why stop there? Well… they didn’t. With technology being what it is these days, companies that traditionally hadn’t even bothered to look at the commuter market got on board with the emerging trend. RazorUSA (better known as Razor) the company that manufactures those iconic kick scooters for kids, is now offering electric scooters of the same type, but now they’ve got electric motors as well. With models starting at around $100, Razor has effectively expended into the commuter market.

One of the things about single-user vehicles, whether it’s a bicycle, scooter or something less familiar, the fun factor always comes into the picture. It’s one of the reasons that the motorcycle has become much more than a mode of transportation to the millions who enjoy them.

Enter the electric skateboard. Granted that not all of us are going to be intrepid enough to opt for a mode of transportation that has a higher potential for injury that others featured here—but the fact is that quite a few people are. For manufacturers who were already making skateboards, it was a logical progression given the trend, and some are now marketing every bit as aggressively to commuters as they market traditional skateboards to kids and teens. Shoppers should expect to pay between $500 and $2000 for one of these boards, depending on the features desired.

Even more radical is the Onewheel, manufactured by the company of the same name. Starting at $950 and featuring a brushless electric motor, the various models offered have one rather large wheel that takes up the center of a traditional skateboard deck. A computer and sensors allow for sharp response and stopping. While the Onewheel is still being marketed primarily to traditional skateboard enthusiasts rather than commuters, all things considered, it’s probably only a matter of time.